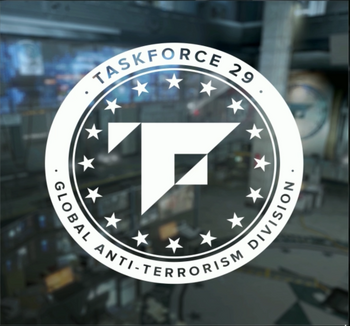 Task Force 29 is one of the Factions in Deus Ex: Mankind Divided.

In the wake of the Aug Incident, nations around the world saw an alarming upsurge in terrorism. It was being carried out both by and against Augmented people. Then, a collaborated attack in multiple cities occurred on March 21, 2028, spurring the U.N. into action. Attributing the deaths to a lack of coordination between local intelligence agencies, they urged member countries to ratify a new division of Interpol: Task Force 29, an integrated terrorism response team with unprecedented global jurisdiction.

In Human Revolution, Adam Jensen worked as head of security for the augmentation manufacturer Sarif Industries. Following the Aug Incident, where augmented people essentially went haywire and unwittingly performed acts of violence and terrorism, Sarif’s business collapsed. Now, Jensen is a member of an anti-terrorist group headed up by Interpol, called Task Force 29.

“The division that he’s in, he is probably the only augmented person in that strike team,” says Mary DeMarle, Mankind Divided’s narrative director. Jensen will travel around the world as he unravels the conspiracy, including an area near Prague that’s now become a prison camp for augmented people. DeMarle says that Jensen’s augmentations give him an in with the people living there that others might not have. And while Task Force 29’s stated goal is to eliminate terrorism, DeMarle is quick to point out that in this world, one person’s terrorist is another’s freedom fighter.

In the chaos following the Aug Incident of 2027, international black market sales of weapons and military-grade augmentations reached unprecedented heights - fueled by organized crime syndicates and fueling, in turn, extreme acts of terrorism on both sides of the augmentation debate. Within months, the U.N. was pleading for more international cooperation and the power to act effectively across international borders. A tense shotgun agreement was reached, calling for the formation of an integrated anti-terrorist intelligence and response team. Led by Interpol, this outfit, later to be named Task Force 29, would have global jurisdiction without the slow-moving bureaucracy that, in the past, had led to missed opportunities.