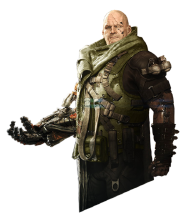 Experience the renowned world of Deus Ex, where the decisions you make and the actions you take play a crucial role in determining the game’s outcome. Choose between combat, stealth, social, and hacking approaches to achieve your objectives. Be mindful though, as in Mankind Divided there will be a meaningful consequence to every action and choice you make.

The year is 2029, and Adam Jensen is once again a changed man. Disillusioned and bitter after his attempt to save the world only left it more divided, he’s joined a newly-created Interpol counter terrorism unit known as Task Force 29. On the surface, Jensen’s goal is to hunt down terrorists in a world that’s spinning out of control. But what he’s really after are the men and women responsible for tearing the world apart, the people who are still pulling the strings.

In his obsessive drive to unmask them, Jensen will continue to dig for answers, inching his way ever closer to the truth. He knows that stopping The Illuminati is the only way to make things right again. For the world. For the men and women he cares about. And for himself.